The bay and coat of Arzachena

Northward of Figari, a deep bay reaches to Cape Libano, with several bare islets off its northern shore, of which Mortorio and Soffi are the principal: the whole group is collectively called “i Mortorii”, and is said to have derived this name from the dreadful carnage suffered by the Pisans, in a battle with the Genoese, that took place close to them. 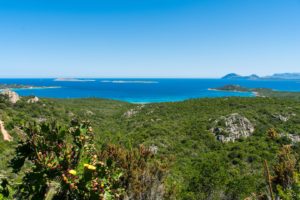 At the bottom of the bay, to the S.W. is the port of Congianus, in shape resembling that of Terranova, but of less dimensions, and very shallow after entering the mouth.

Between it and point Canisone, to the eastward, is a deep bight, called the Marinella, affording excellent anchorage in all but N.E. winds.

Beyond the Mortorii islets are the rocks of Libani [Li Nibani], and rather more than a mile distant from them is the little harbour of Porto Cervo, in which a ship may anchor in seven or eight fathoms: it must be noted that about half a mile to the N.E. of the entrance, there is a rocky shoal, with only thirteen feet water on it. 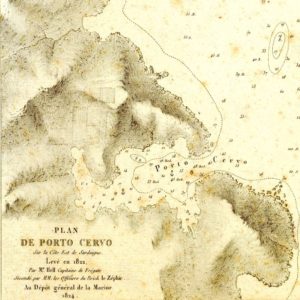 The general coast line, from Figari to Longo-Sardo is formed by a succession of granite mountains, of moderate height, with rugged summits, forming grotesque resemblances to edifices. This chain is partially sprinkled with forests of holm oaks, yews, junipers, and wild olives; intermixed with a thick-set underwood of myrtle, cistus, arbutus, and other shrubs; in which are great numbers of mufflons, deer, and wild hogs; and it also affords indifferent pasturage to large flocks of sheep and goats. 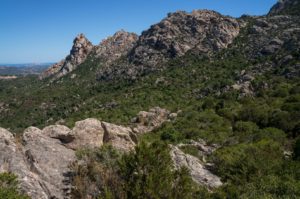 There are very few dwellings except huts, and scarcely even the usual coast-towers of defence; for it is inhabited only by Nomadic shepherds and banditti, the latter of whom generally find security in these fastnesses, from the weak and venal arm of Gallura justice.

These mountains are intersected by the fine, well-watered, and extensive, though uncultivated, plains of Liscia, Arsaquena, and Congianus; the flocks and herds of which are tended by a few straggling peasants, who quit the towns of Luras and Tempio, after the feast of All Souls, and remain till the end of June; when, to avoid the intemperie, they repair to their habitations. During this time they are occupied with their dairies, and the making of coarse cheese; each peasant also cultivates a small piece of ground for wheat and barley, merely sufficient for the support of his family. […] 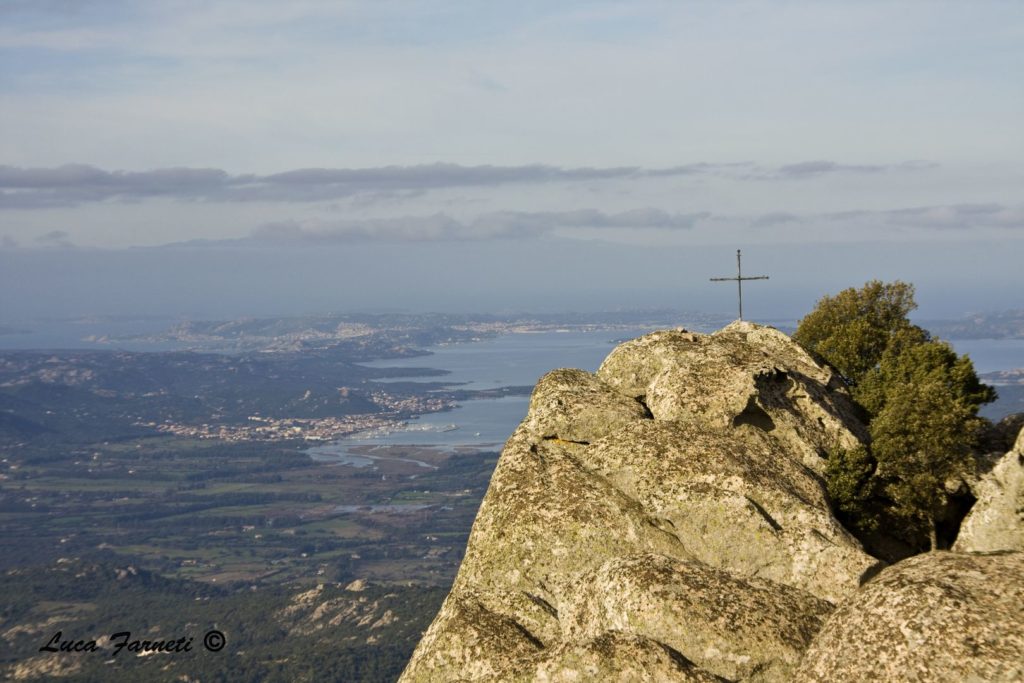 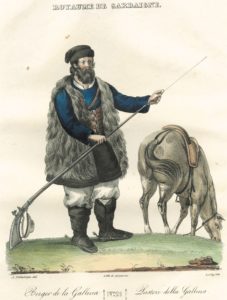 The valley of Arsaquena is marshy towards the harbour: a little inland, there is a Nuraghe, and vestiges of the town whence the name is derived, but scarcely a habitation is now to be seen. […]

These fine grounds are watered by a meandering stream, which, though nearly dry in August, is never actually so: it contains trout, perch, and eels, and its shallow parts swarm with tortoises. In their respective seasons there is also an abundance of partridges, quails, doves, beccafichi, and many other birds; especially the beautiful “apiolu,” or bee-eater, which works its nest in horizontal galleries, deep sunk into the banks of the river. […] 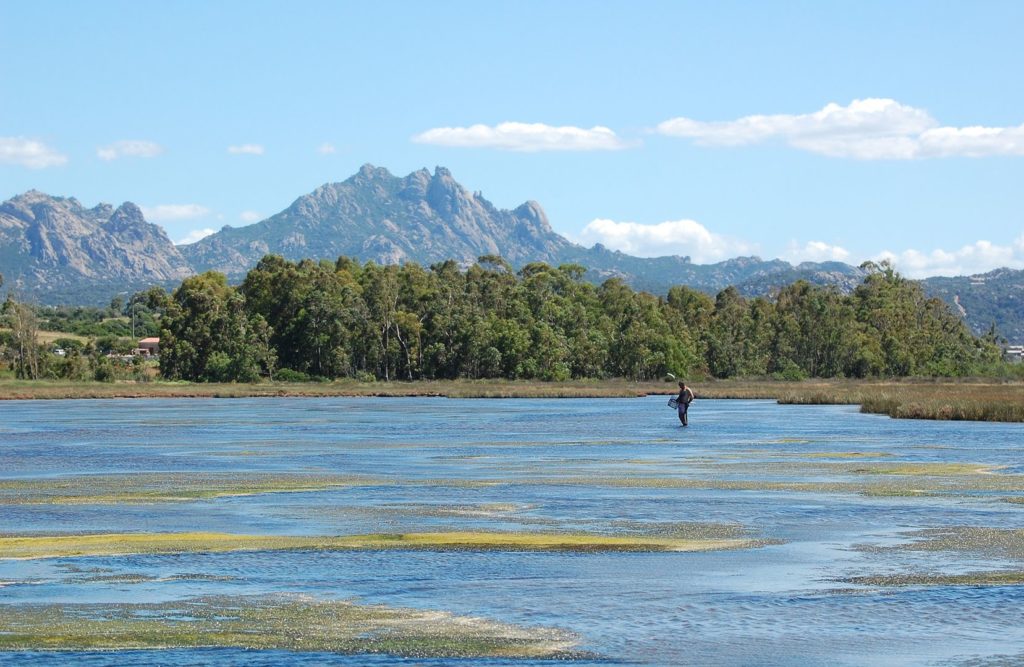 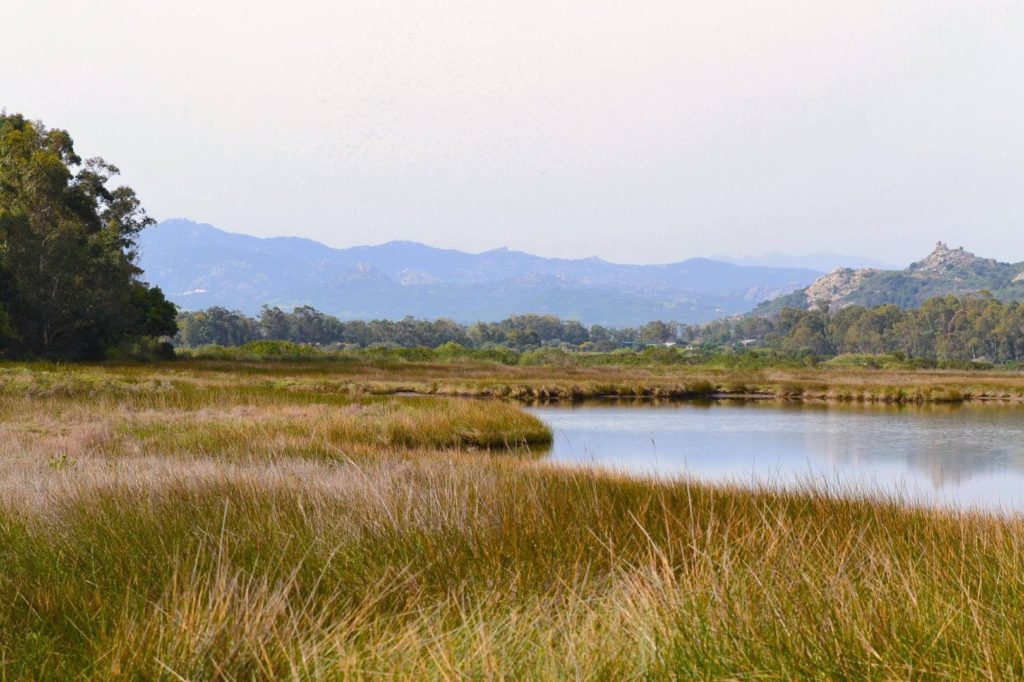 The periodical festivities of the Gallura are of a more peculiar stamp, combining rusticity and hospitality, with independence and ferocity. The principal of these are celebrated at Arsequina and Logu Santu; and being precisely similar in their practices, a description of the former will suffice.

It occurs on the third Sunday in May: we landed on the Saturday, and rode up to the chapel of Santa Maria, which, with two other small buildings, are on a beautiful hill covered with trees, except in front, where an open spot overlooks a woody plain. 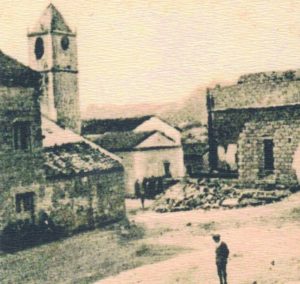 Crowds of people were congregating from all parts; some were employed in killing and suspending the devoted animals to the boughs of the trees, others had already proceeded to roasting, and there was scarcely a bush that had not a horse tied to it.

The feast is regulated by a company of thirty or forty Capo Pastori, entitled the I “soprastanti” of the ceremonies; each of whom must provide a sheep or goat, twelve pounds of cheese, and thirty of bread; and they must jointly furnish oil, candles, fuel, cooking utensils, and four or five hundred bottles of wine, on which all comers are gratuitously regaled. In a short time the scene derived great interest from the activity and bustle of such a multitude; and, under the canopy of heaven, various parties commenced dancing the “salto Sardo,” the “ballo tondo,” and the more lively pelicordina while, in other parts, poets were heard reciting their Amoebaean verses in coarse recitative. 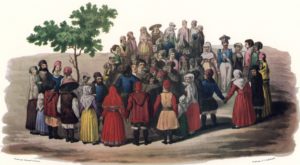 The variety in the dress of the females, and the dark caps, jackets, and kilts, over the white drawers and neat-laced gaiters of the men, gave a picturesque effect to the whole, which was not a little enhanced by the black busby beards, long straight hair, and hardy features of the “pastori,” whose truculent aspect seems to authorize the custom in Barbary, of distinguishing Christians from Sards. 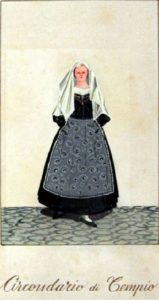 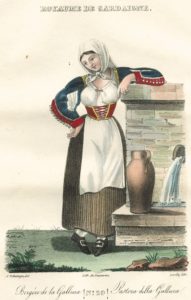 In the evening, a long tract of ground was strewed with leaves of the “Scilla maritima” and rushes, to the height of five or six inches, as a substitute for a table, and down sat the multitude to a repast, served by the soprastanti in person. Precedency, however, was duly attended to; for one part of this Celtic table was covered with napkins, and furnished with particular dishes, while the indigent were placed to more common viands at the opposite end.

After supper, the amusements recommenced, and continued throughout the night; those that were fatigued rested under the trees, so that, at day-break, I observed groups of men, women, and children lying in every direction — though there was no lack of merry people to keep up the dance and the song. One poet, in particular, continued till morning was far advanced, with a ditty that appeared deeply interesting to his auditors; but his voice was harsh and very monotonous. The atmosphere was beautifully clear; and the silvery moon, together with the dulcet notes of numerous nightingales, enhanced the pleasures of the night. 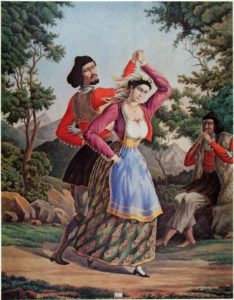 On the Sunday morning, the chapel bell began to ring, when the whole multitude moved to the front of the church overlooking the plain, to see the sacred flag of Tempio brought in procession. On reaching the foot of the hill, this banner, gorgeously decorated, and surmounted by a silver cross, is planted in an open space, and several horses are then galloped to display their speed. After this, the banner is brought up the hill, on a fine horse, by one of the members of a family, whose privilege it is to carry it, and paraded in the direction of the sun, round the church three times; the people catching at it, and kissing it with great devotion, during its progress. 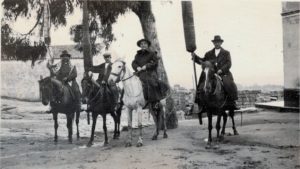 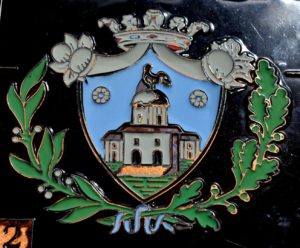 Prayers, dances, poems, dinner and supper, conclude the day; and on the Monday the whole party proceeds a few hundred yards to the S.W. to the ruinous chapel of St. Pietro di Baldolinu, where the ceremonies and feasting are repeated.

This chapel is the charnel-house of the shepherds of the vicinity, whose bodies are thrown into a large vault, without lime, forming such a revolting and offensively -putrid mass, that the “soprastanti” have been obliged to erect an altar for the celebration of prayer, outside of the edifice. Three men had been murdered by banditti, and thrown in without any ceremony by the shepherds, only a few days before my arrival; for there is no coroner’s inquest, to take cognizance of secret murder here. I was informed that a man, “sotto penitenza,” occasionally descends this disgusting cavern, to clear away the bodies from under the opening, precaution being first taken, to lower down and burn several torches.

The feast of Santa Maria de Arsequina has seldom been celebrated without the sacrifice of three or four lives: the year preceding my visit two of the “carabinieri reali” had been killed; and I was shown a young man, who on the same occasion received a ball through the breast; but having thus satisfied his foe, according to the Sard code of honour, and fortunately recovering, was, with his wife and a beautiful child, now enjoying the gaieties in safety.

I could not learn why there were no carabineers in attendance on this anniversary; but the consequence was a numerous concourse of banditti from the circumjacent fastnesses, notwithstanding the presence of a great many “barancelli,” who, it is known, will not arrest a man that “is only an assassin.” 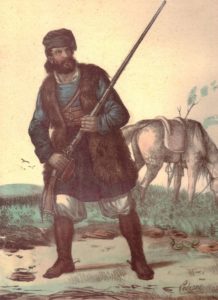 The arrival of two Englishmen at this festival, was a novelty that appeared to give infinite satisfaction, especially as Mr. Craig took a Corsican fiddler with him, which was the only music, except jews harps, and human voices, for hundreds to dance to.

Another circumstance that excited many remarks, was the extreme gaiety of two young priests, whose dancing and singing gave great offence to many of the grave elders: indeed, the regard of the country people for their religious observances is very remarkable; an instance of which I noticed at an entertainment, where much anger arose from a Piedmontese officer giving the name of “Spirito Santo” to a dish of stewed pigeons. 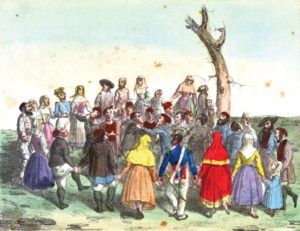 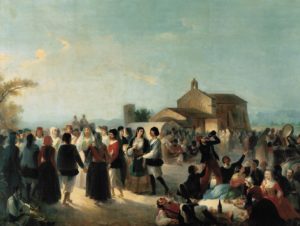 “Old coat of arms of Tempio”, from rete.comuni-italiani.it