This group is composed entirely of red granite, forming, with the main, several secure harbours, capable of containing fleets, and affording ingress and egress with any winds; advantages which were highly estimated by the heroic and immortal Nelson.

So little, however, was this admirable naval station known in the middle of the last century, that it was a question whether the islands belonged to Sardinia or to Corsica, till some engineers were despatched, with the consent of the French court, to draw a visual line from east to west, equidistant between point Lo Sprono on the latter, and point Falcone on the former; it being agreed, that all north of this line should belong to Corsica, and all south of it should remain to Sardinia. These intermediate isles consist of Maddalena, Caprera, Santo Stefano, Santa Maria, Budelli, Razzoli, La Presa, Spargi, Spargiotto, Giardinelli, and Biscie: with the Bar[r]ettini, Monaci, Cappuccini, Porco, and Paganetto rocks. Excepting Maddalena, they may be said to be nearly uninhabited, there being but a few temporary herdsmen with their cattle; and they are alternately cultivated for three years by people from the town, and grazed the three years next following by the herdsmen. 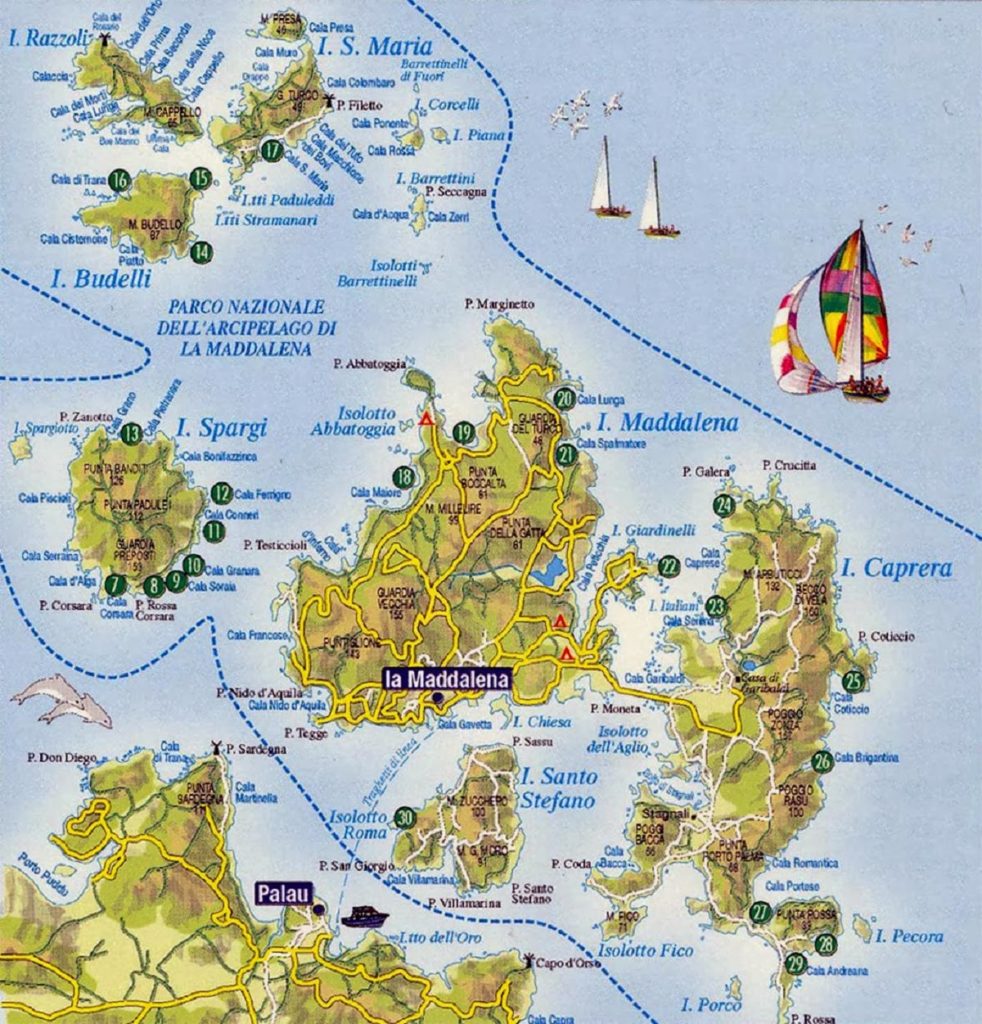 About seventy years ago, a village was founded at Maddalena, the Insula Phintonis of the ancients, and a stout fort was erected for its defence.

Some fugitive Corsican families were amongst the first settlers; and, from its salubrity and eligibility for Italian traffic, it has become a tolerable town of upwards of 1600 inhabitants. 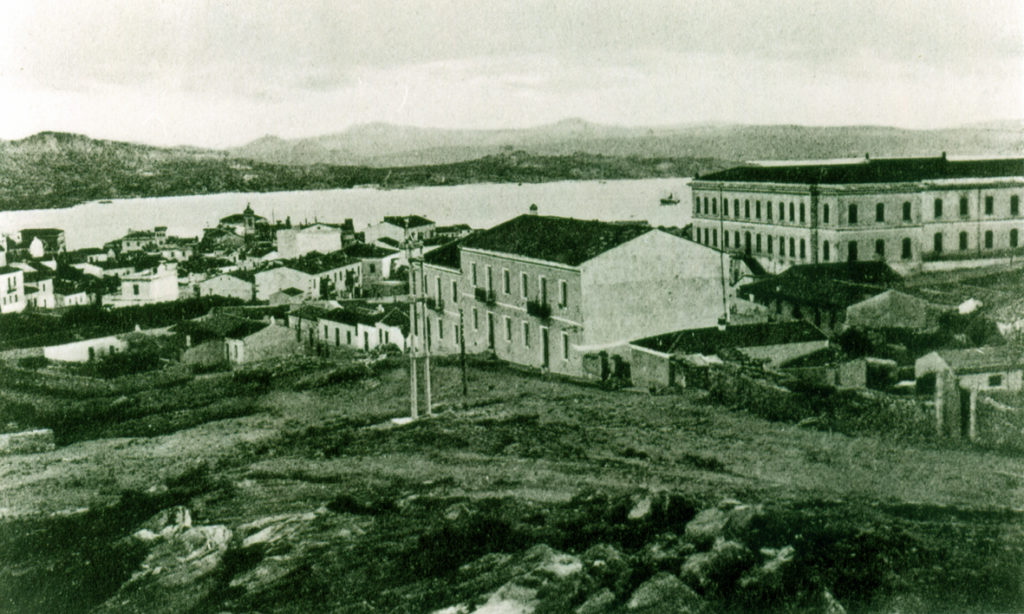 The natives are accounted a lively people, and brave sailors; but as they have an utter aversion to work, they are very poor, living mostly on bread and water; while they quietly witness the busy industry of the Neapolitans in fishing in their waters, and carrying away whole cargoes of their lobsters. The abundance of nacres in the quiet bays of Poglio [Porto Pollo], Liscia, Puzzo [Porto Pozzo ], and Arsequena, would offer an easy branch of trade, by the manufacture of its filaments; but there is only one woman who will take the trouble to make gloves of them; nor will either male or female act as servants. 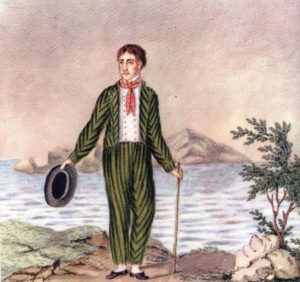 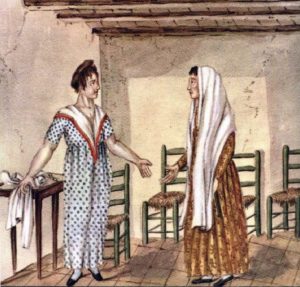 Mr. Craig has benefited the people much during his residence there, by prevailing on some of the most active, to collect the lichens and rock mosses of the neighbouring mountains, of which he annually sends a cargo to Scotland; and the money he thereby expends amongst them, is of acknowledged utility. 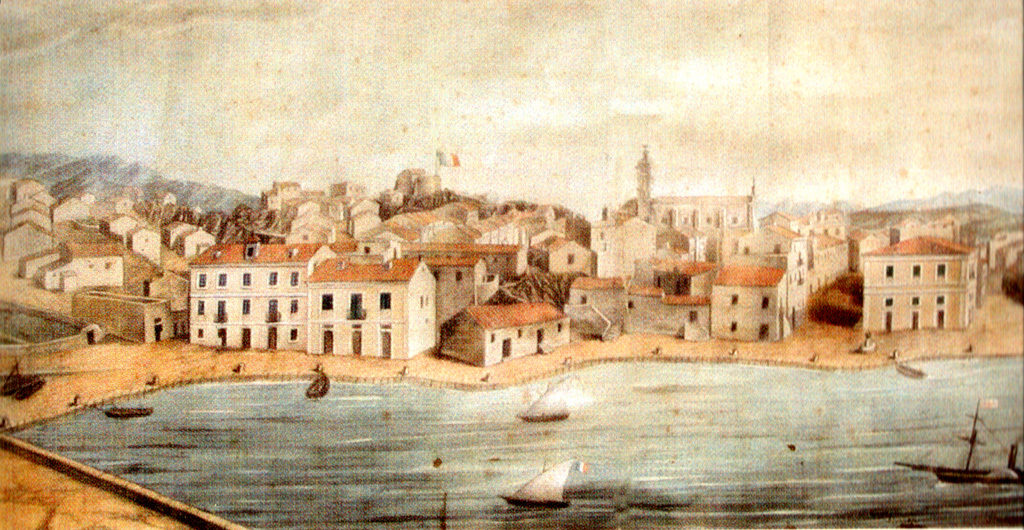 The town is tolerably clean, but straggling; has a capital anchorage before it, and a cove for boats, called Cala Gavetu. Lord Nelson, to whom the islanders were warmly attached, promised to build a church for them. This, we may conclude, was prevented only by his lamented death, for he had already sent a most acceptable present, of two massy silver candlesticks, and a crucifix of silver with a gold Saviour, of very elegant workmanship. The pedestal of each has three faces, on one of which are enchased the arms of Nelson, on the second those of Bronte, and on the third this inscription: 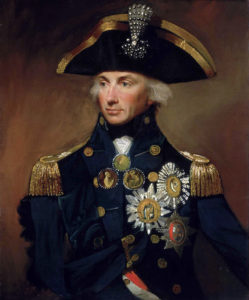 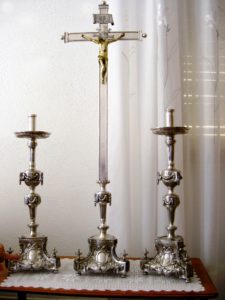 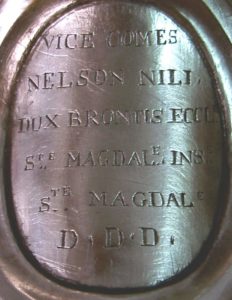 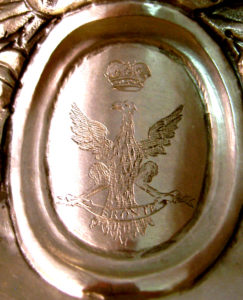 This island is about eleven miles in circuit, and has five forts for its defence, of which the principal is called La Guardia Vecchia. It stands on an elevation of upwards of six hundred feet, and near the ruins of a former village; it has eight guns on a platform, and one commanding it, on the telegraph tower. Both this and fort Camiggio, to the east of the town, are furnished with melancholy dungeon-prisons for state delinquents, evidently constructed with such cruel motives, that they cannot even be inspected without emotions of horror. 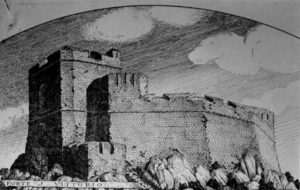 The island is cultivated wherever it will possibly allow of it, but nothing can exceed the sterility of its northern rocky shores. Vegetables and fruit are obtained, not from Sardinia, as might naturally be expected, but from Corsica; and the fine lettuces of Bonifacio are an article of great consumption. Owing to their poverty and idleness, the people seldom visit each other, except at festivals; but still, in passing their houses, the sound of the guitar may always be heard, and want seems to make but little impression on their animal spirits.

Crime is not uncommon; and the means of redress are difficult: while the judge, having but seventy-five dollars per annum, cannot be said to be above the influence of Plutus. The situation is exceedingly healthy; and the wild pease that grow about the hills offer a spontaneous addition to the minestra. 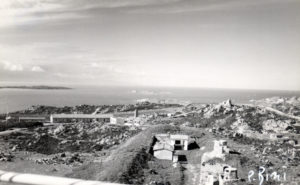 Though it is not my intention, in this place, to give technical directions for sailing through the channels of these islands, I must observe that navigators will find good shelter in any of their spacious bays. The berth to be preferred, is at the Mezzo Schifo, S.W. of the town, as it is near the Pararau [Palau], and therefore good for watering, while wood may be cut in the immediate vicinity.

Maddalena has rocky shores, and except the principal harbour, has only beaches for boats; the bay on the N.W. side is the largest, and encloses three sandy coves in it. Between Maddalena and Caprera, is the low islet of Giardinelli, which with its rocks and shelves nearly blocks up the intervening passages. 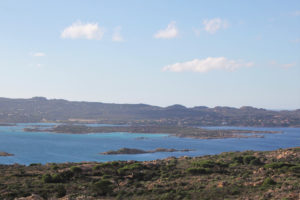 Caprera is a high and irregular isle to the S.E. of Maddalena, quite barren on its north and east faces; towards its centre is a peak called Tagiolona [Tejalone], upwards of 750 feet in height, near which is a spring of pure water. Caprera has several coves on its coasts, the principal of which is Port Palma, where the Neapolitan fishermen take great numbers of fine cray-fish, for the supply of the Italian markets. The low isle of Biscie forms the outer point of the eastern channel, and is remarkable for the acontias, or little black snake, whence it derives its name. It should be observed that this is the worst entrance to the anchorage, for strangers, as there are three hidden dangers in the fairway, which Lord Nelson’s squadron escaped, almost miraculously, when beating through it at dusk in a gale of wind; for, as Vice-Admiral Sir Richard Keats informed me, they were afterwards detected by the Excellent, of seventy-four guns, striking in a light breeze. 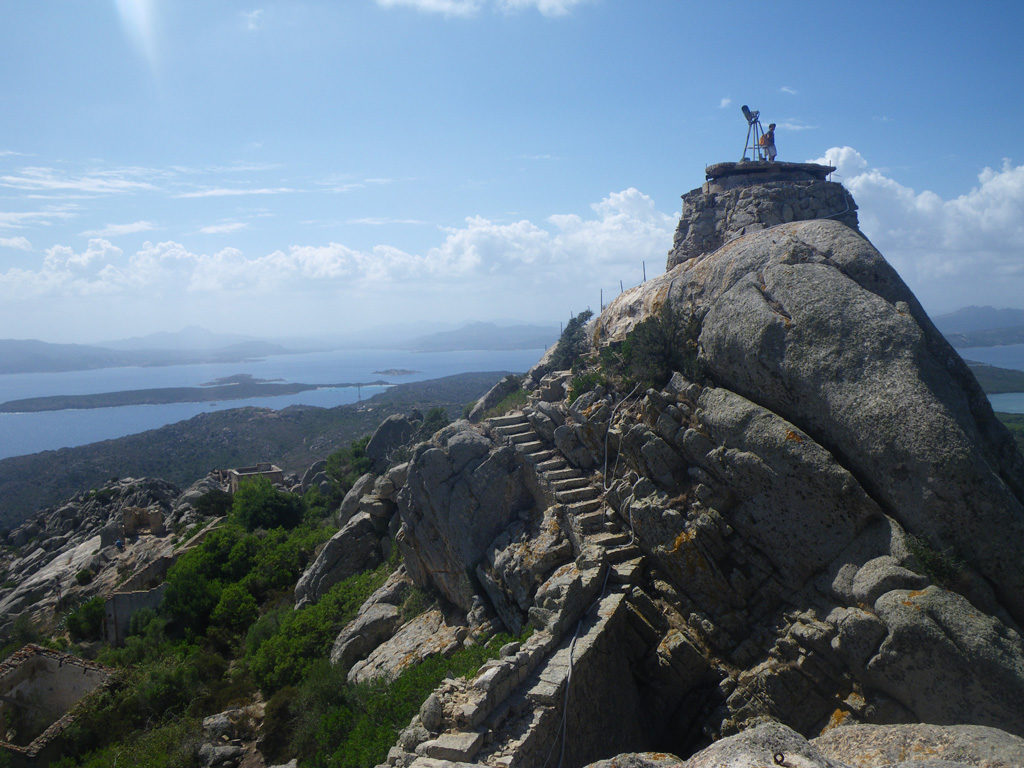 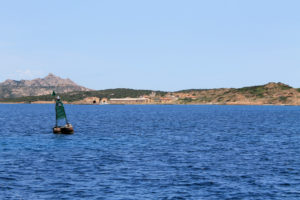 Santo Stefano is a high island to the south of Maddalena, and has a small harbour defended by fort St. George, with a garrison of three or four soldiers, the taking of which in 1793, was the incident in the military career of Napoleon […]. 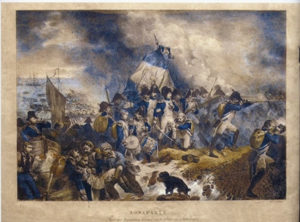 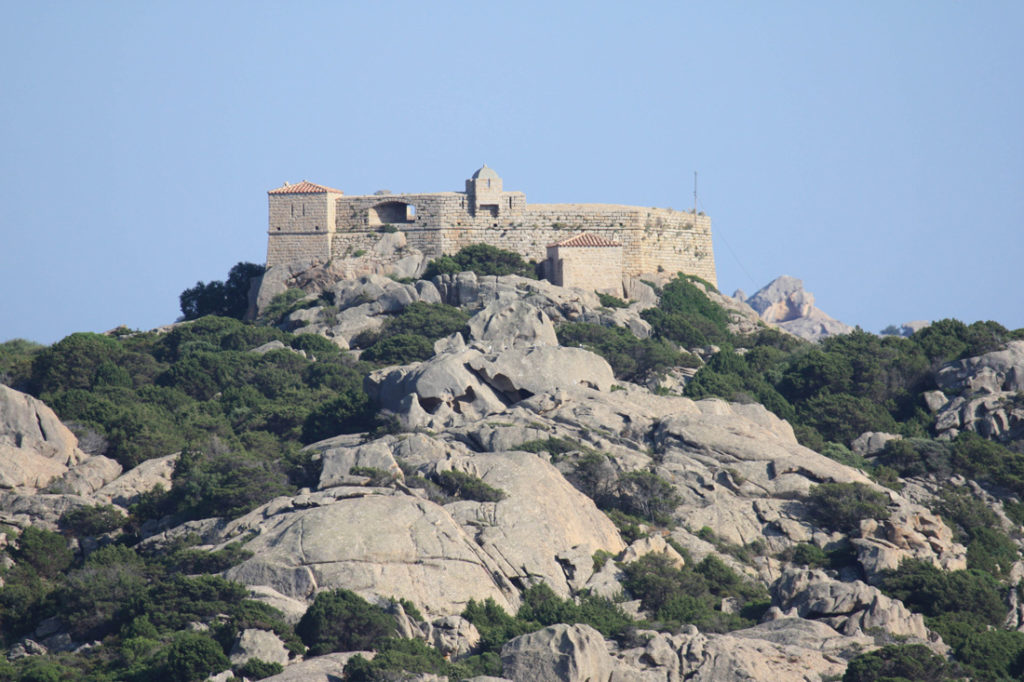 To the west of Maddalena lies Spargi, also high and covered with brushwood: it has two sandy bays, and a spring of excellent water near the Cala Corsale. Off it lies Spargiotto, a rugged barren islet, with smaller rocks off its N.W. extremity, called Spargiottelli. The northern-most of the Intermediate Isles, consists of a group of a more moderate height, called Budelli, Razzoli, Santa Maria, and La Presa; whilst between them and Maddalena are the bare tabled rocks of Barettini, the channels amongst which are mostly clear of hidden danger.

In sailing about and amongst these islands, attention must be paid to the “rafficas,” or violent squalls off the hills; and it is esteemed a sign of bad weather when Corsica cannot be seen; or, as the natives say, “when it has got its cap on.” 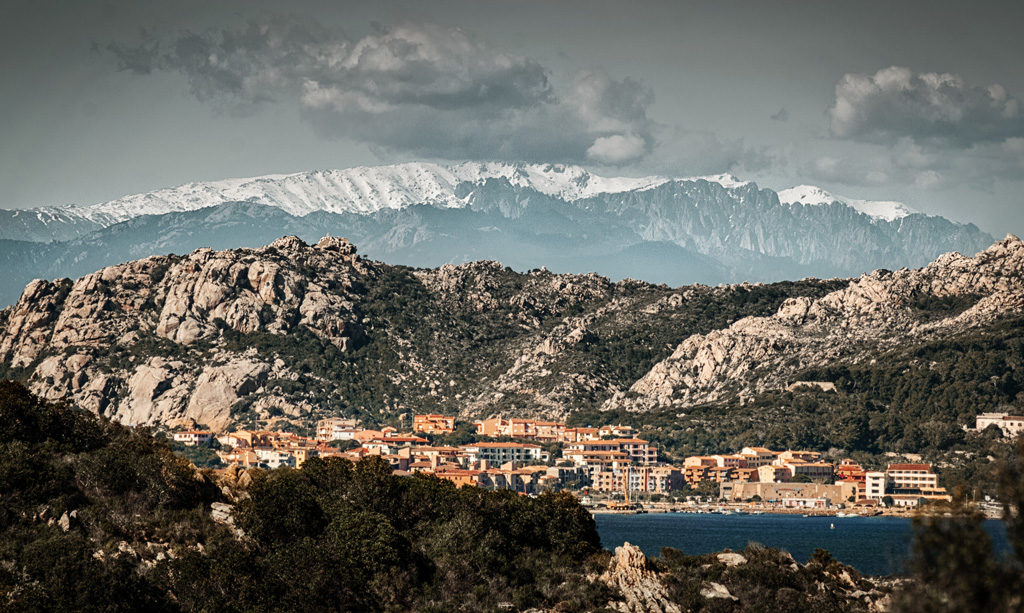 Besides the island peaks and points, two remarkable objects enable seamen to take up a proper anchorage: the one is a square, inclined rock, called the pedestal, on Mount Mola, over Porto Cervo, which may be readily seen from the southern reaches; the other is the figure of a bear, formed by a natural mass of granite, on a rugged point between the Pararau and Salinas [Saline], which is therefore named Punta dell’Orso. 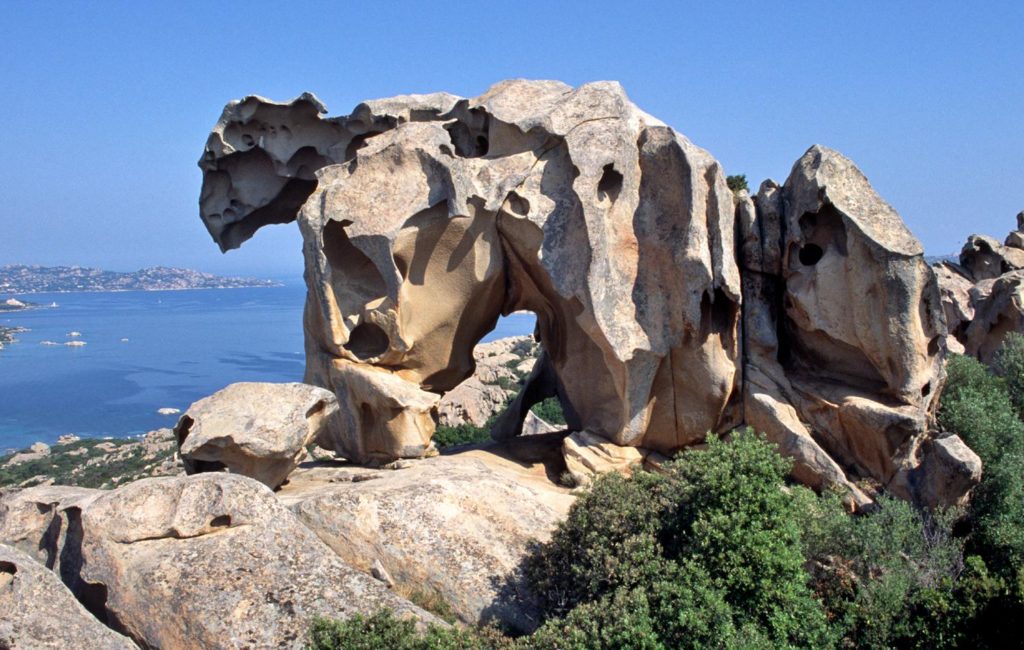 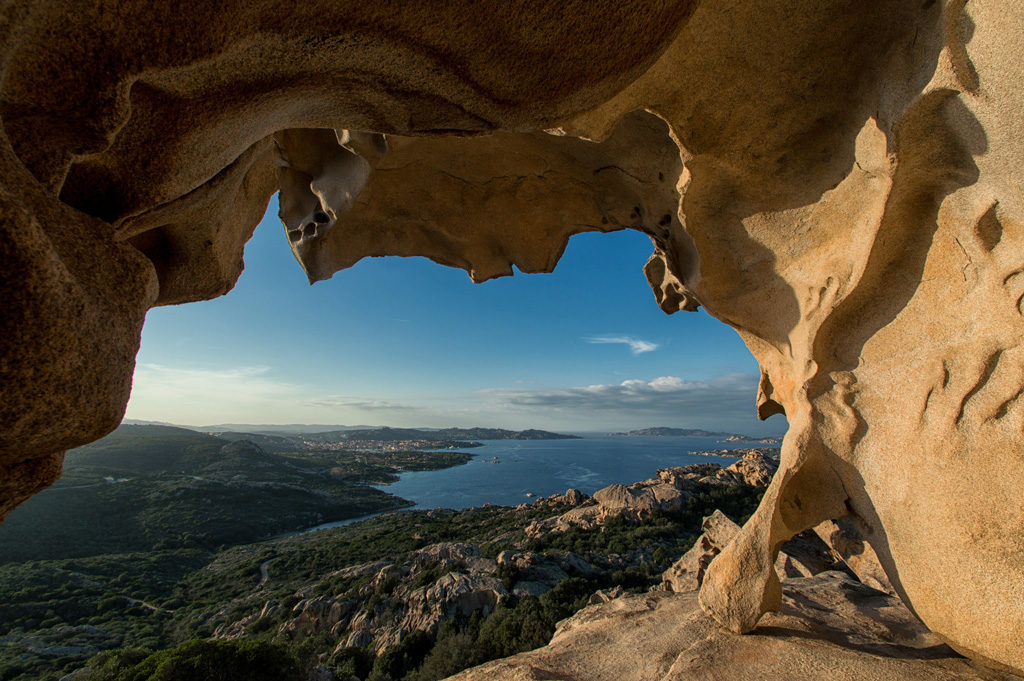